Over the next week, all of the artists will have the chance to rehearse on stage and make any last minute changes to their performance before the live broadcasts. Today, fifteen countries will rehearse for the second time. 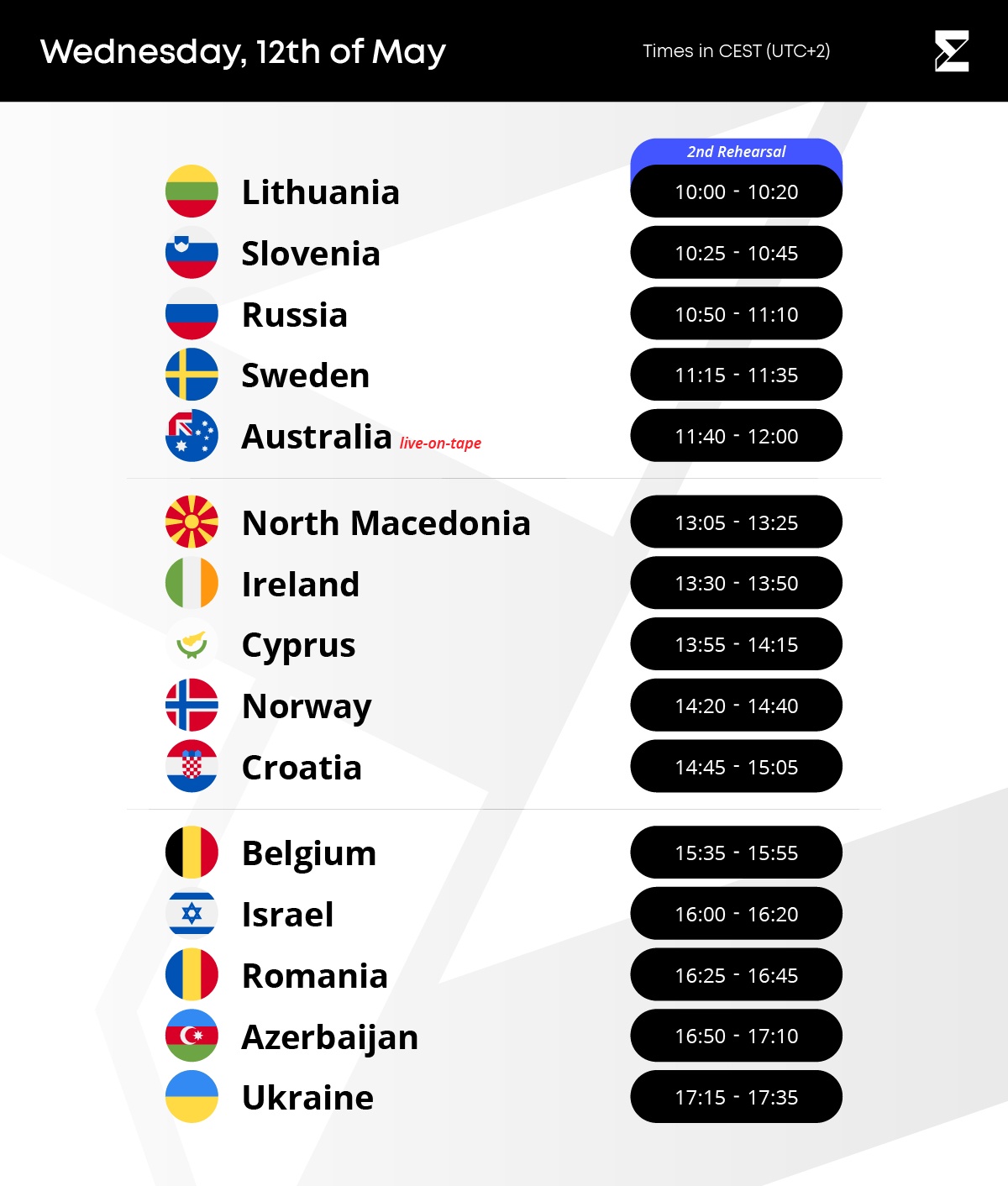 13:02 CET // Hello everybody and welcome to the second part of today’s live coverage of second rehearsals!

13:07 CET // For the first chorus, it appears that a golden ball of light is projected onto his chest to almost look like his heart. The ball of light appears to grow roots before he stretches his hands forward, turning the ball of light  into a cloud of golden glitter.

13:08 CET // The main colours used are gold and black. The LED screen appears to look like at first a starry night, before exploding into warm golden shapes.

13:08 CET // It appears that there are no major changes from the first rehearsal and Vasil seems impressed with his rehearsal.

13:18 CET // The performance starts in darkness with Vasil looking into the camera and singing the opening verse.

13:21 CET // On the first run through, the mirrorball trick didn’t seem to work as well, however, it’s worked very well this time, reflecting light all over the stage

13:31 CET // Lesley has started the first run through of the second rehearsal

13:31 CET // The performance is very well put together, using a combination of paper cut outs and a projection screen to make it appear to the viewer that she’s in a story book. It starts in a forest before eventually moving to the sea. It looks very effective.

13:33 CET // On the final chorus, Lesley comes down the runway to sing. She’s wearing a bottle-green jumpsuit. The LED screen glows bright orange and you can see her set of props that have been used to create the storybook effect behind her.

13:42 CET // It looks like the paper props have almost like a pop-up book style quality to them as at one part, what appears to be tree branches pop out.

13:44 CET // On the final line of the song, two paper trees appear on the orange LED background.

13:47 CET // Lesley has started a final run through of the performance.

13:49 CET // The final paper cut out placed in front of the camera before Lesley moves down the runway is of a street.

13:57 CET // Elena has started her first run through of her second rehearsal.

14:00 CET // Not much appears to have changed from the first rehearsal, the camera angles appear to be tighter. The mirror behind Elena and her dancers really works as a bit of an optical illusion to make it look more like there’s more than 5 people on the stage.

14:01 CET // There was a couple of technical hitches in the first run through that press saw on Sunday but these all appear to have been fixed.

14:08 CET // Elena has started her second run through of the day

14:11 CET // Elena is vocally strong and kept up with her choreography well. The mirror is moved away to reveal the wooden “El diablo” letters.

14:15 CET// This time, pyro has been added to the performance, flames coming up from behind the “El diablo” wooden lettering as the mirror is lifted upwards.

14:23 CET// TIX has started his first run through of his second rehearsal.

14:26 CET// The staging is very similar to the MGP performance, however, there are two less demons on stage and TIX is wearing a silver glittery suit underneath his coat.

14:36 CET // The performance uses a lot of moving white spotlights and the predominant colours in the performance seem to be blue, silver white, and black

14:37 CET // Overall, no major changes appear to have been made to the live performance besides a couple of camera angle changes but nothing major has been added or taken away.

14:49 CET // Albina has just started the first run through of her second rehearsal.

14:50 CET // One of the main differences between the first and second rehearsal is that the dancers are slightly more spaced out which gives Albina more room to move around. Vocally, she has improved too.

15:02 CET // At the beginning of the performance, Albina appears to interact with the rays of light better so they look like they’re coming from her hand

15:09 CET // Pyro has been used in this run through of this song which appears as Albina says “Tick-Tock” at the end of the song