With a couple of hours to go until the first rehearsals for the second half of Semi-Final One, here’s what to expect from the performances today.

Nine countries take to the Eurovision stage for the first time today from Cyprus to Malta. In this article, we give you an overview of what to expect from each of the rehearsals today based on the hints, drops of information, and pictures released ahead of the contest. 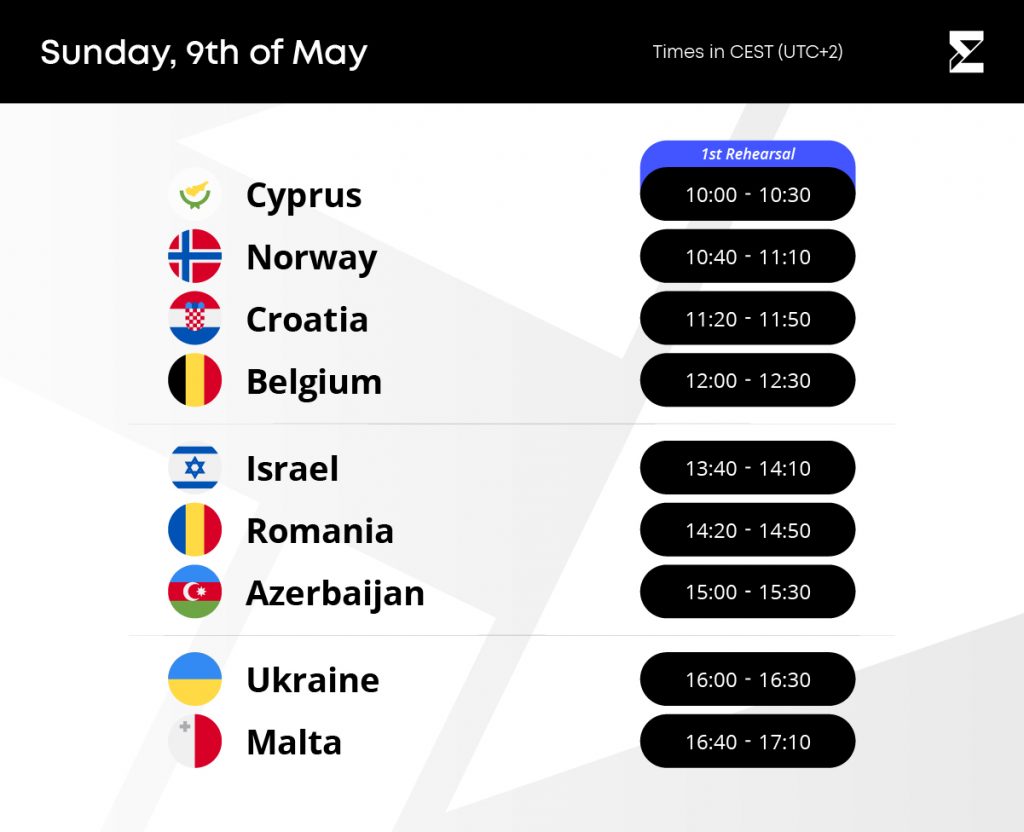 It has already been confirmed Elena is set to be joined by four backing dancers on stage for her performance. The singer has stated in the past that viewers should expect to see an “explosive“ performance from herself and her dancers.

Images were also released from her live on tape recording in March, which you can see below:

Checkout the behind the scenes photo from 🇨🇾 Cyprus' live-on-tape recording for #Eurovision 2021 which was filmed in Sofia, Bulgaria earlier this week. pic.twitter.com/WhfJKh3Stn

TIX will be joined by five people for his Eurovision performance which will likely retain elements of his Melodi Grand Prix performance. The singer confirmed earlier this week he will be joined on stage by four dancers and one off-stage backing singer. TIX previously confirmed he will be wearing an “upgraded” outfit for the contest.

Croatia is expected to keep the key elements of its performance from the national final in February. Albina’s performance has been created by Creative Director Marvin Dietmann, who is working for a number of countries this year, four dancers will be joining Albina on the Ahoy stage.

Hooverphonic wants to be the dark horse of this year’s Eurovision Song Contest and has revealed little information about their performance. The group has simply stated that it will have a Hooverphonic feel.

Israel has released very little information regarding what we can expect from Eden’s performance today. It is expected based on images of the delegation travelling to the Netherlands that Eden is being joined by dancers on stage.

Images from the rehearsals of “Amnesia” show that Roxen will be accompanied by dancers for her performance. It is not known whether she will be carry over the same styling from the official music video to the Eurovision stage.

Azerbaijan has revealed a number of details of their performance ahead of the competition. Efendi will be utilising pre-recorded backing vocals for her performance and accompanied by four dancers and promised a bright and colourful performance.

Earlier this week it was announced that Rufat Ismayil has designed the outfit she will be wearing. Efendi’s costume will be adorned with precious and semi-precious stones; it will combine national elements from Azerbaijan in a modern vision.

The Azeri performance has been created by Mads Enggaard. He was the Stage Director for Azerbaijan in 2019 when Chingiz performed “Truth”, he previously worked on the Danish performances in 2004, 2010, 2010, and 2019

Go_A have let little out regarding what people can expect from their performance at Eurovision. However on Friday UA:PBC released a video featuring snippets of the groups live on tape recording in March.

In the recording it is clear to see that they have used a number of props resembling dead trees, there is the use of a snow-covered backdrop in parts of the backing LED/VT and there are some large iron gates apparent as well. It would also appear that the outfits of Go_A are in tune with their modern, dark outfits they have used for the music video.

The favourites to win the Eurovision Song Contest 2021 will be the last country rehearsing today. Destiny’s performance has been created by the Jean Baptiste Group, she is being joined by four female dancers on stage in Rotterdam.