The designer of Hooverphonic’s outfits for Rotterdam 2021 has revealed some sketches to give us a sneak peak of Geike’s outfit for their performances on stage.

Before Hooverphonic and the rest of the Belgian delegation departed via coach to Rotterdam, their costume designer Tom Eerebout released some sketches to give us an indication of what we can expect Gieke to be wearing on the stage.

Tom Eerebout has previously designed outfits for world-famous artists including Kylie Minogue and Lady Gaga. When interviewed, he said that “Geike was the source of inspiration for the design… It’s based on her movements, who she is, how she performs.” He also confessed that the price tag for the outfit “wasn’t cheap”.

From the sketches, we can deduce that Geike will be wearing a short dress with a seemingly open back. She will also be wearing knee-high boots. For now, this is all we can ascertain, as Tom did not reveal any information with regard to colour or material. You can see the sketches below: 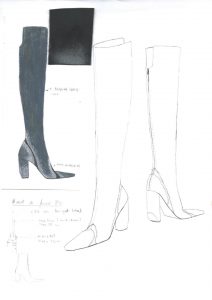 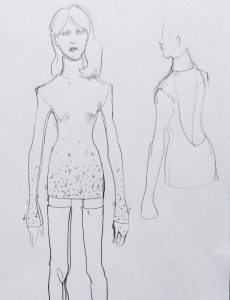 Hooverphonic have now departed for Rotterdam with their delegation, which includes Tom Eerebout, ready for their first rehearsal today (Sunday 9th May).

VRT opted to internally select Hooverphonic in 2020. Hooverphonic were first due to represent Belgium at the Eurovision Song Contest in 2020 with the song “Release Me” but following the cancellation of Eurovision 2020, it was decided by VRT to reselect the group for Eurovision 2021.

Belgium in the Eurovision Song Contest

Belgium was one of the original seven nations to participate in the first edition of the Eurovision Song Contest in 1956. To date, the country has won the contest only once in 1986. Sandra Kim won the contest with the song “J’aime la vie”, her victory was not without controversy when it emerged that Sandra was just 13 years old, two years younger than the age restriction at the time. In the late 00s, Belgium struggled in the contest failing to reach the final annually from 2005 until 2010, when Tom Dice finished 6th in the final with 143 points. Belgium has finished last at the contest six times, including two sets of nul points.

Thomas is originally from England but moved to Luxembourg in 2017. He joined the Eurovoix team in 2020. He has followed the Eurovision Song Contest since 2004 and first attended in 2014.