In this year’s instalment of Eurojury, there are six countries being represented by a single jury member.

These jury members and their corresponding countries are as follows: Sofia Nizharadze represented Georgia in the Eurovision Song Contest back in 2010 in Oslo, Norway. Her song “Shine” advanced to the grand final and even won the jury vote in the semi final that year. In the final Sofia finished in 9th place which was Georgia’s best placing ever, her position was matched by Eldrine the following year, however she remains Georgia’s highest score at the contest to this day with 136 points.

Since appearing at Eurovision, Sofia has continued an impressive music career, releasing the single “When We Danced” in 2013. She also has experience performing with the likes of Andrea Bocelli and Julio Iglesias. She then went on to become a judge on The X Factor Georgia and also Georgia’s Got Talent.

Sofia’s top 3 in Eurojury 2020 consists of Bulgaria, Lithuania and Romania. Kati’s career began at the age of seven when she sang the opening track for Vuk, a Hungarian animated film. She continued to study music before starting to receive recognition following her appearance on the Hungarian version of The X Factor back in 2010. She finished the competition in 6th place and went on to be chosen to represent Hungary at the Eurovision Song Contest in 2011.

In the contest in Dusseldorf, Kati performed her song “What About My Dreams?” which was a fan favourite leading up to the show. She became the first act to reach the final for Hungary in 4 years before eventually finishing in 22nd place, receiving 12 points from Finland.

The following year she returned to the selection show “A Dal” as a judge. She once again returned to the competition in 2015 as a contestant, she reached the final again with the song “Ne engedj el”.

Kati’s top 3 in Eurojury 2020 consists of Austria, Romania and Sweden. Originally from Brazil, Avraham De Carvalho moved to Israel four years ago. He decided to move to Israel after he discovered at the age of 17 that his family on both his mother and father’s side descended from Jewish religion which inspired both his relocation and coversion to Judaism.

He first came to the attention of the Israeli public when he auditioned for the show “HaKokhav HaBa L’Eurovizion” where he attempted to represent Israel at the Eurovision Song Contest on home soil while the contest was held in Tel Aviv. He admitted that he often communicated on the show in English as he had not perfected his Hebrew. However throughout the competition he was welcomed by judges and audiences and by performing covers in each round, he finished in 4th place.

Avraham’s top 3 in Eurojury 2020 consists of Italy, Sweden and Switzerland. 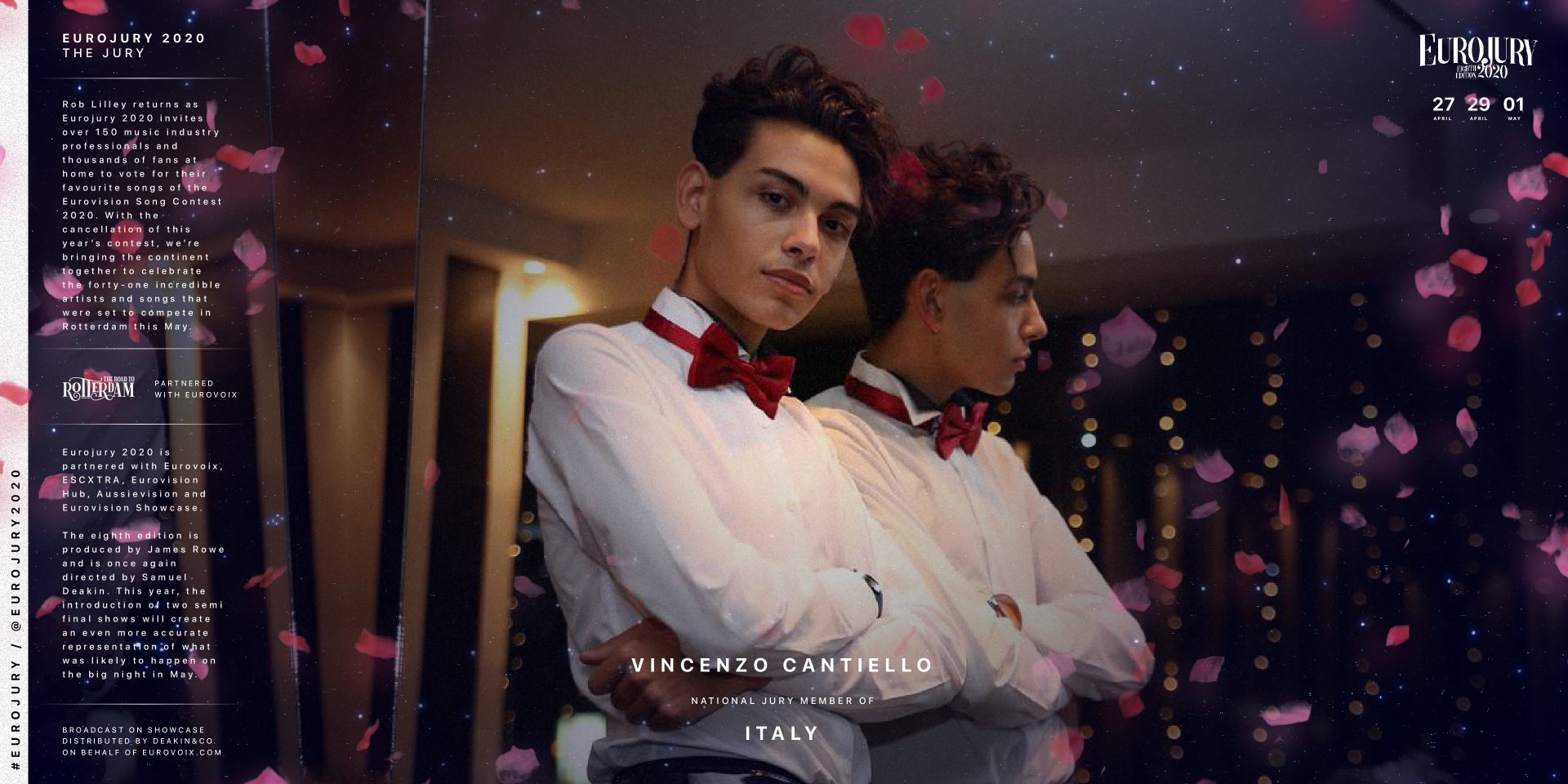 Vincenzo is recognised as Italy’s first representative at the Junior Eurovision Song Contest back in 2014. He represented the country in Malta with the song “Tu primo grande amore” and was the only male vocalist in the entire competition. Eventually he won the competition for Italy, making them the first country in the history of the competition to win on their debut attempt after Croatia won the debut edition of the contest in 2003.

Since winning Junior Eurovision, Vincenzo continues to release music and record covers for his social media. He released his debut album “Never Too Much” in 2016.

Vincenzo’s top 3 in Eurojury 2020 consists of Malta, The Netherlands and Romania. Mila Moskov recently competed for North Macedonia in the Junior Eurovision Song Contest 2019 in Poland. Her song “Fire” was a firm favourite leading into the competition where it finished in 6th place. This was the best result for the country in the contest in 11 years.

Away from Junior Eurovision, she began her music career at the age of just six years old. Mila has also taken part in several other concerts and competitions and is part of a choir called Little Angels who raise awareness for children with special needs.

Mila’s top 3 in Eurojury 2020 consists of Albania, Malta and Romania.

Dalibor is a classically trained violinist originally from Slovakia. With assistance of his father, he was first introduced to the violin at the age of three.

With his experience in several competitions he was selected to represent Austria in Eurovision Young Musicians back in 2002. His work in the violin eventually won him the competition, becoming the third violinist to win for Austria in the contest history.

Following his appearance at Eurovision Young Musicians, Dalibor continued to thrive within the classical music industry and has performed for royalty such as Prince Charles back in 2003. In 2009 Dalibor was awarded the Prize of Minister of Culture of the Slovak Republic for his international success.

North Macedonia and Israel will feature in the first semi final of Eurojury 2020 on Monday the 27th of April. They were due to be represented in the Eurovision Song Contest 2020 by Vasil and Eden Alene respectively with their songs “You” and “Feker libi”

Georgia will feature in the second semi final of Eurojury 2020 on Wednesday the 27th of April. They were due to be represented in the Eurovision Song Contest 2020 by Tornike Kipiani with the song “Take Me As I Am”.

Italy will feature automatically in the grand final of Eurojury 2020 on Friday the 1st of May as a member of the Big 5. Italy were due to be represented in the Eurovision Song Contest 2020 by Diodato with the song “Fai rumore”.

Both Hungary and Slovakia are participating in Eurojury 2020 as voting countries only. Neither country had sent an entry to participate in the Eurovision Song Contest this year.