Thomas Ring started as a table tennis player and reached the top level of competition in Denmark when he was 17. When he was 18, he got a guitar as a birthday present from his parents and started writing and composing songs soon afterwards.

In 2016, after two English-language albums, Thomas began releasing music in his native Danish. His first Danish single “Mit Danmark” was released that year. In 2017, he took part in Dansk Melodi Grand Prix with the song “Vesterbro”. He did not advance to the superfinal. Jonas Flodager Rasmussen, known professionally as simply Rasmussen, is a singer and actor. He is currently the lead singer of Hair Metal Heröes, an 80s cover band which performs covers by artists such as ABBA and Elton John. Working as a stage actor, he took part in numerous musicals such as Les Misérables, West Side Story, and Rent. Outside of his music career, he works as a teacher at the School of Performing Arts at Viborg Cultural School, and Aarhus Theatre Learning.

In 2018, Rasmussen represented Denmark at the Eurovision Song Contest in Lisbon with the song “Higher Ground”. He finished 9th in the final. Albin Ljungqvist, more commonly known as Albin Fredy, is a Swedish singer and songwriter based in Denmark. He studied at the Ballet Academy in Gothenburg and was the show captain at Wallmans Circus before becoming a freelance artist.

Albin has participated twice in Dansk Melodi Grand Prix. In 2013, he participated with the song “Beautiful to Me”. He returned to the contest in 2018, where he finished third in the superfinal with “Music for the Road”.

Ole Tøpholm is a radio host and journalist. Since 2000, he has been working for DR, the Danish national broadcaster. He first worked on the regional radio station DR Østjylland before moving to national radio and working on the news show DR Nyheder. He currently works as a reporter for Radioavisen and is the morning news presenter on DR P3 Radio.

Ole has been a Eurovision fan since childhood and is a former president of OGAE Denmark. Since 2011, he has commentated on the Eurovision Song Contest for Danish viewers. His contract with DR states that he is allowed two weeks off every year to attend the contest. In 2009, he published the book Dansk Melodi Grand Prix – De største øjeblikke about the history of Dansk Melodi Grand Prix.

More information can be found through his Instagram profile. 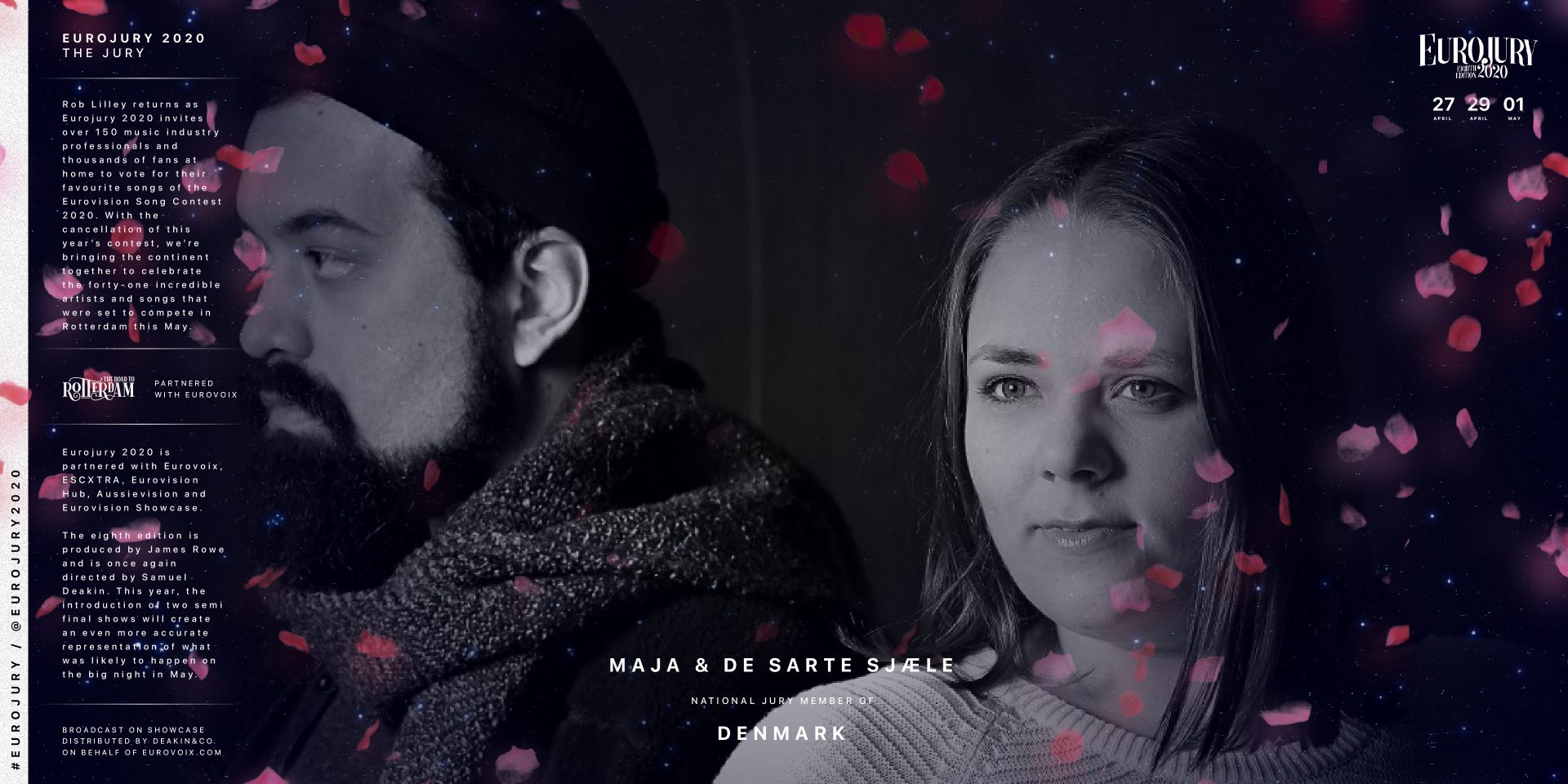 Maja og De Sarte Sjæle are a duo formed of Timo Andersen and Maja Rudolph. The duo first released music in 2016. Their debut single “Uden dig” became one of the most played songs on Danish radio in 2016. Their self-titled debut album was released in 2017 and was nominated for “Best Danish Pop Release” at the Gaffa Awards.

This year, Maja og De Sarte Sjæle took part in Dansk Melodi Grand Prix with the song “Den eneste goth i Vejle”. They did not advance to the superfinal. 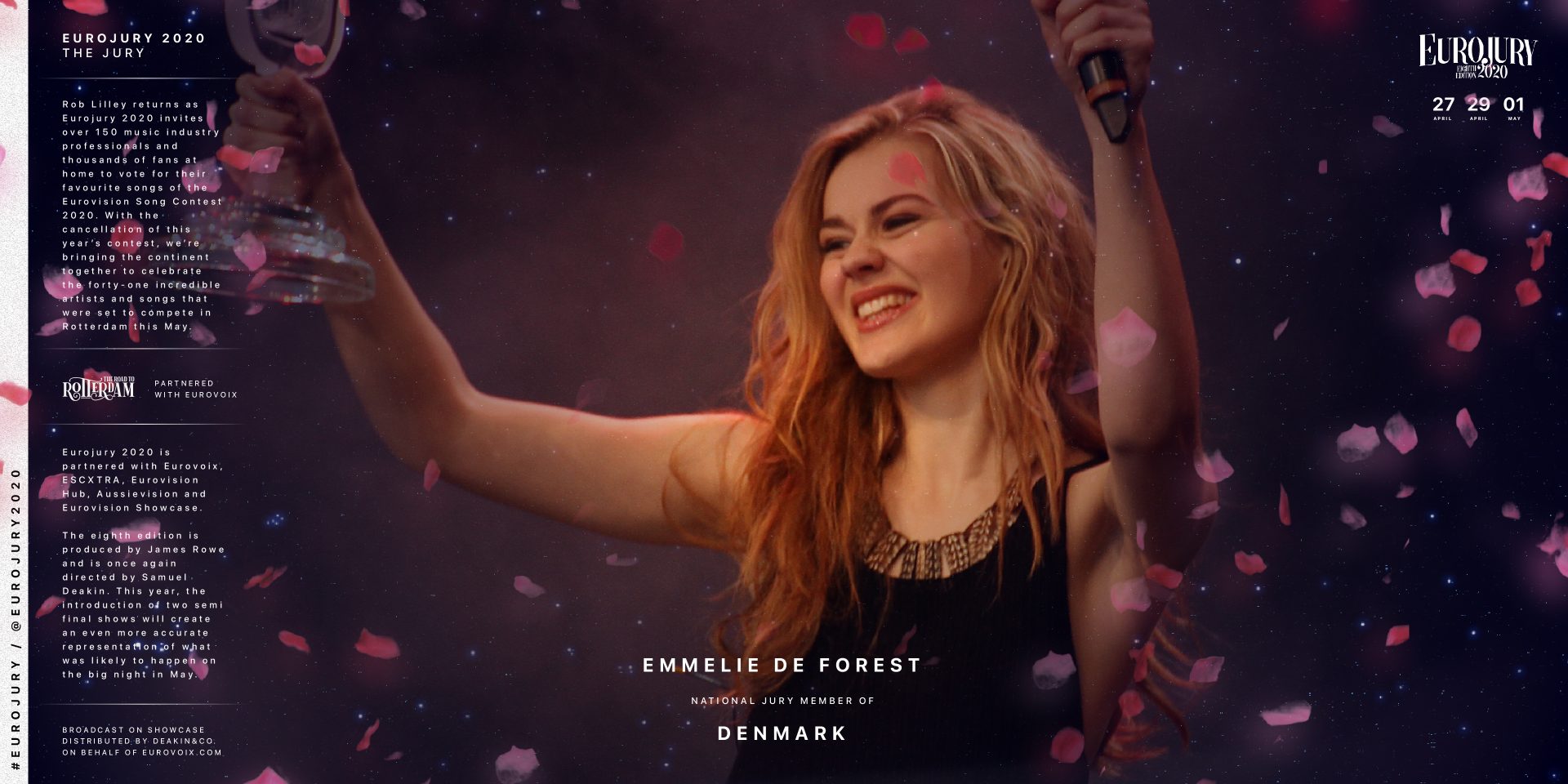 Emmelie de Forest was born to a Danish mother and a Swedish father in central Denmark. She started singing at the age of nine. At the age of 14, she started perfoming at small venues and music festivals with Scottish folk musician Fraiser Neill.

In 2014, Emmelie’s song “Rainmaker” was chosen as the official #JoinUs song for the Eurovision Song Contest 2014 in Copenhagen. She performed the song live during the interval act at the Grand Final.

In 2017, Emmelie wrote the British entry for the Eurovision Song Contest in Kyiv, “Never Give Up On You” by Lucie Jones. The song went on to finish 15th in the final. In 2018, Emmelie released her second album “History”.

As revealed previously, in alphabetical order, the top 10 countries selected by the Danish jury are:

Denmark will feature in the 17th position in the second semi final of Eurojury 2020 on Wednesday the 29th of April. Denmark were due to be represented in the Eurovision Song Contest 2020 by Ben & Tan with the song “Yes”.