09:00 CET // Shalom and welcome to the first day of rehearsals for Eurovision 2019 at Expo Tel Aviv!

09:01 CET // Cyprus begin their first rehearsal with an impressive use of the LED screens.

09:02 CET // Tamta has a costume change, which gets a gasp and applause from the Press Centre.

09:14 CET // Tamta starts off the performance alone in the dark before being lit up and joined by four backing dancers.

09:18 CET // Tamta uses a Boomerang effect during one of the choruses.

09:19 CET // Another slick and polished performance from Cyprus. The bar has definitely been set for the rest of today’s acts.

09:26 CET // One of the dancer’s hats has fallen off but he kicks it to the side and keeps on going.

09:28 CET // In a change to the earlier announced schedule, Czech Republic have swapped rehearsal slots with Montenegro.

09:34 CET // Before each performance begins, the flag of said country will appear in the triangles above the stage.

09:37 CET // Lake Malawi begin their first run through with each member of the band in their own cube.

09:38 CET // The band are wearing the same clothes as they did in their performance at Vidbir.

09:41 CET // The Lake Malawi logo appears on the LED screens during the last chorus with “friend” translated into all of the languages of this year’s participating countries.

09:42 CET // That was the first rehearsal that the Press Centre were able to hear. We had no sound for any of Cyprus’ rehearsals.

09:49 CET // The cubes are used in a similar way to the Instagram effect in the official music video.

09:54 CET // The backing vocals and main vocals are currently being balanced against each other to make sure that neither one is too loud.

09:58 CET // Lake Malawi begin their third run through with lots of bright colour.

10:00 CET // Albert moves to the front of the stage for the last part of the song. The main and backing vocals are much more balanced now.

10:08 CET // The staging has changed from UMK. The dancer is now centre stage with Darude on a raised platform on the left and Sebastian on the walkway in front of the stage.

10:13 CET // The graphics have remained unchanged.

10:15 CET // Sebastian apparently could not hear the backing track in his in-ears.

10:21 CET // Sebastian seems a lot more sure vocally the second time round.

10:26 CET // Darude is just bopping along and having a good time as only he can.

10:41 CET // Tulia start the performance on a revolving platform.

10:46 CET // The members’ faces are being projected on the LED screen.

10:55 CET // All four members are wearing matching red traditional outfits with a sparkly veil which they remove before the first chorus.

10:57 CET // Tulia missed their cue for the second verse while coming off the platform.

10:59 CET // Apart from the missed cue, the vocals have drastically improved.

11:09 CET // Keeping in tune with the stage, the LED screen also have lots of triangles.

11:10 CET // Slight timing issues still but still their best run through so far. 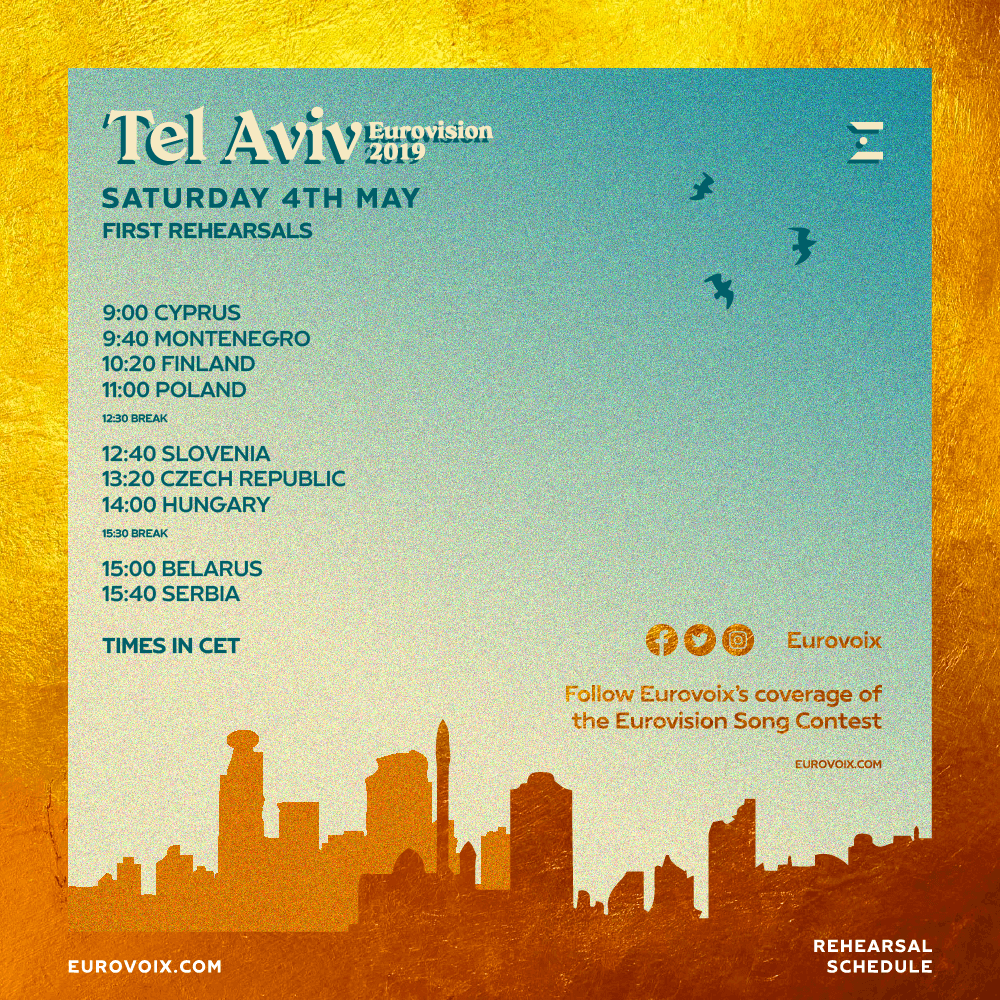 To get the most out of our coverage of this year’s contest in Tel Aviv, make sure to follow us on all of our social media platforms.